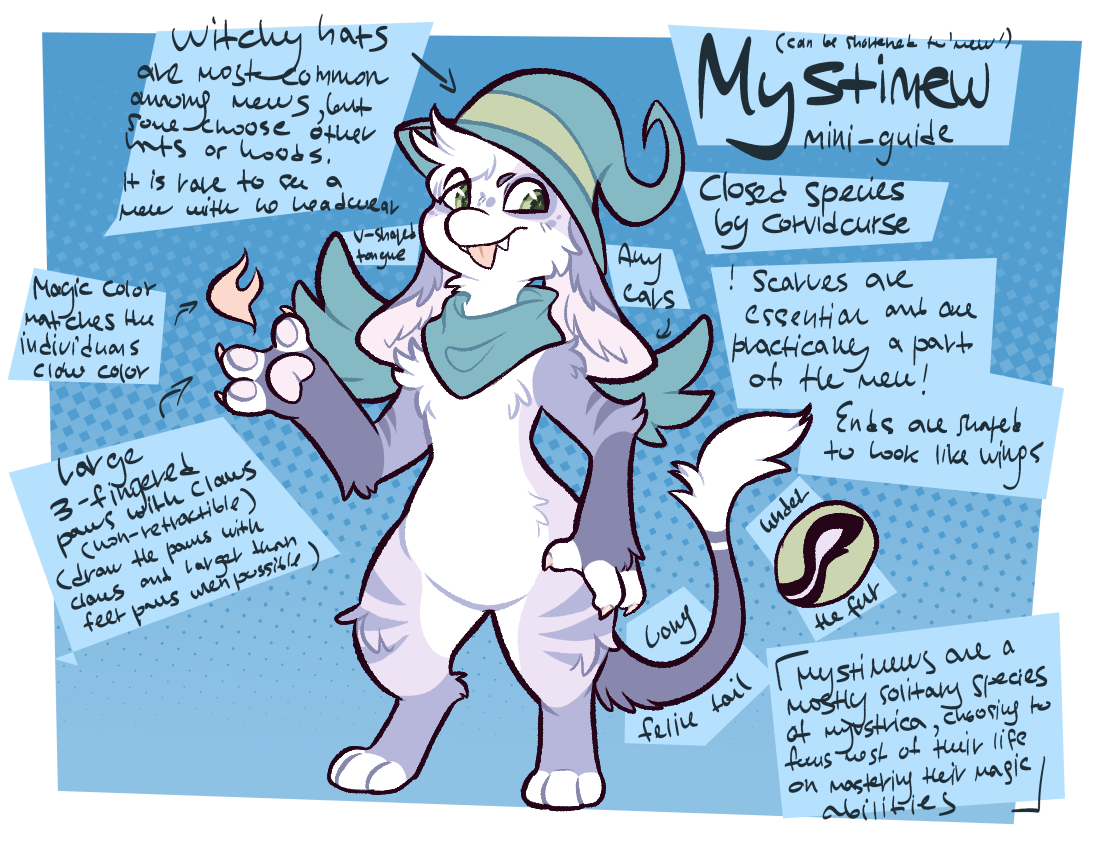 Mystimews are only partly organic, being mostly made up of magic, which flows through them in place of blood. They generally have a somewhat pear shaped body, but the exact shape and build may vary from individual to individual. Normally they have short to medium fur, which naturally comes in shades of gray or brown, however majority of mystimews tend to change the color of their fur with dyes and magic, so in practice they come in any and all colors of the rainbow. There are also longhaired and hairless varietes of mystimews.

Mews' eyes have vertical pupils and allow them to see in the dark. Their ears vary, though generally they point down, due to most mystimews wearing hats. They have large, three-fingered paws with pawpads and claws which indicate the color of a mystimew's magic aura; however the claws may be dyed, disguising the real color. Mews have long feline tails with an ovoid tip, though it sometimes might not be visible under their fur.

Mystimews are omnivores and have very long lifespans, without many threats to be concerned about. Due to their long lifespans and high survivability, mystimews generally don't feel a big need to reproduce, focusing instead on perfecting their magic and other abilities. During their life a mystimew spends most of their time focused on working on their magic, making potions and various trinkets and making up new techniques.

Although mystimews aren't extremely social creatures, they do have small communities for the purpose of trade of goods and services as well as shelter. Generally they make villages in moderate climate areas, but they exist in different climates as well. When they do interact with other species, mystimews are very friendly and curious. 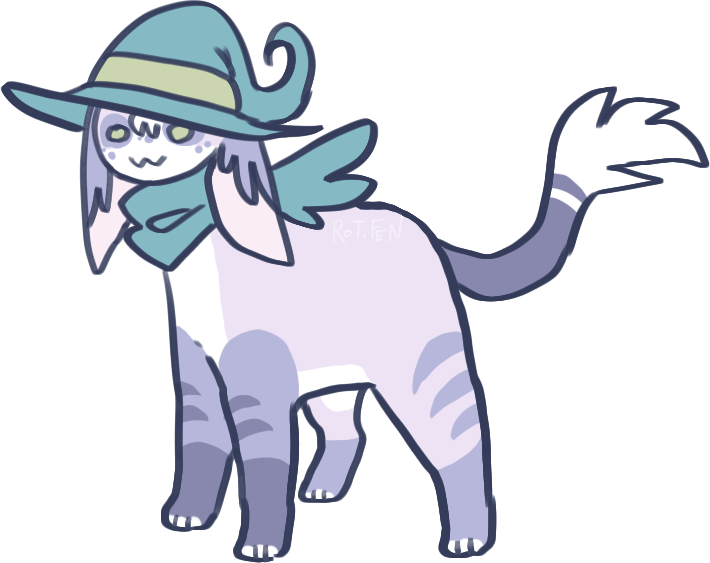 Every mystimew has a familiar! They can be any Myvstrican animal, or a protomew. Familiars always have the same colors as their bonded mew! The mew and their familiar have a special bond, and it gives the animal the ability to think and speak. Protomews are basically identical to their mew, just smaller and their limbs are more catlike. They're the size of a cat. Mystimews generally prefer to spend time with their familiars rather than others.

Scarves are essential for mystimews, not only do they enhance a mew's magic ability greatly and are commonly heavily enchanted, but they also serve as an extra magic magic reserve. Mystimews usually get linked with their scarf at a young age. If they takes off their scarf afterwards, they become really sick, as at that point the scaft has practically become part of them. Not to mention that, since Mystimews are heavily magical beings and the scarf houses a big part their magical energy, having it taken away is like having a fourth of your blood taken in an instant.

Over time mystimews separated from their scarf may get used to the side-effects or recover through other means, however they will, naturally, have a lower magic reserve and be considerably weaker, aswell as actually aging at a much faster rate either until they're reunited with the scarf or they expire. The same applies to mews that haven't gotten bonded with a scarf.

Other creatures forcibly taking a mystimew's scarf will be severely ill and incapacitated until the scarf is removed, some mews may even make it so such theif gets permanentally cursed for their misdeed.

Aside from scarves, mystimews love to wear hats. Generally they're made of the same material as the scarves, having similar perks, but they don't cause dependency like scarves do. Usually, they look like the traditional witch hats, but some have unique, different looking hats.

Longhaired
Mystimews that have lived in cold areas for generations tend to have thicker fur, naturally coming in much lighter colors than regular mews. They rarely change the color of it as well, even if they move to warmer areas. Their scarves are thicker and they wear them covering their snouts when out. They overheat easily in warm areas, so if they're staying there for a long time, they usually regularly trim their fur. Addionally when staying in warm areas they shed almost constantly.

Hairless
Hairless mystimews are an extremely rare occurence, since it's a pretty rare mutation as is and mystimews dont reproduce much in their lifetimes. There will be only so few individuals like this in an entire population at a time. These mystimews always wear some custom made clothing in addition to a mew's usual attire, as they will quickly get cold otherwise. Due to this lack of fur they cant live or generally be in colder areas, unless they wear very warm clothing. They are also rarely seen in very sunny areas, since they're more sensitive to sunburns and such.

All mystimews can use magic, and many of them are able to use advanced magic. They're born with a slight predisposition to a specific type, however it doesn't have to affect what they end up using. Most decide what they will learn during childhood, based on what they're interested in or what comes to them easily. It is rare that a mew doesn't discover anything like that until well into adulthood; in that case their community will most likely see them as quite strange.